We take your security very seriously. In order to protect you and our systems, we are making changes to all HSBC websites that means some of the oldest web browser versions will no longer be able to access these sites. Generally, the latest versions of a browser (like Internet Explorer, Google Chrome, Apple Safari, etc.) and an operating system family (like Microsoft Windows, MacOS) have the most up-to-date security features.

If you are seeing this message, we have detected that you are using an older, unsupported browser.

See how to update your browser

We use cookies to give you the best experience on our website. By continuing to browse the site, you are agreeing to our use of cookies. You can change your cookie settings at any time but if you do, you may lose some vital functionality. More information can be found in our Cookie Policy.

In a further sign that the authorities are determined to mitigate the impact of COVID-2019, the US Federal Reserve cut interest rates by a full 1 per cent (to 0.00 per cent to 0.25 per cent range) on 15 March, after bringing their decision forward from later this week. Other measures were also announced including buying of a further USD700 billion of US Treasury bonds, ensuring emergency funding for banks should they need it, and coordinating swap line arrangements with other major central banks to ensure a plentiful supply of USD (mitigating a risk which occurred during the global financial crisis). Central banks in Asia have also acted in March to ease rates, including in Korea, Australia, New Zealand, Malaysia, Hong Kong (following the Fed’s move), China (by form of targeted RRR) and Indonesia (by form of RRR).

Global credit markets were very weak in the week ending 13 March, even in high quality bonds by the end of the week. The selloff in higher quality bonds is almost certainly because these are the most liquid and easiest to sell. The Fed’s move may be at least partly to offset this somewhat counterintuitive reaction in sovereign and high quality bond markets.

‘Boring’ is probably a good thing to say about any market at the moment, but in comparison to what is happening in some other corners of the financial world, the price action in Asia fixed income is somewhat pedestrian. Spreads in Asia have not been immune and even the most conservative of our strategies is seeing negative days; there is a deterioration in even higher quality credit indices now, but not very drastic. The Fed rate cut should help this with a strong rally in rates and injection of liquidity. Local currency bonds are holding up quite well – especially China with RMB moderately stable.

Source: Bloomberg, Markit, JP Morgan as of 13 March 2020. Investment involves risks. Past performance is not indicative of future performance.

It might be worth having a longer term perspective on Asia fixed income performance which shows that, although a painful period, it is not so dramatic.

Source: Bloomberg, Markit, JP Morgan as of 13 March 2020. Investment involves risks. Past performance is not indicative of future performance.

These are difficult times and of course a material year-to-date negative return from Asian high yield should not be trivialized, but the nature of riskier credit markets is that you do occasionally have these periods of drawdown, but the recovery tends to be quick. Even in the global financial crisis in 2008 – which at its heart was a credit market crisis – the drawdown of the Asia high yield market lasted just a few months and the market had started its recovery rather quickly. In other situations, the recovery was even quicker. The total return of the US high yield market – which has a much longer history – shows a similar pattern going back to the mid-1980s. 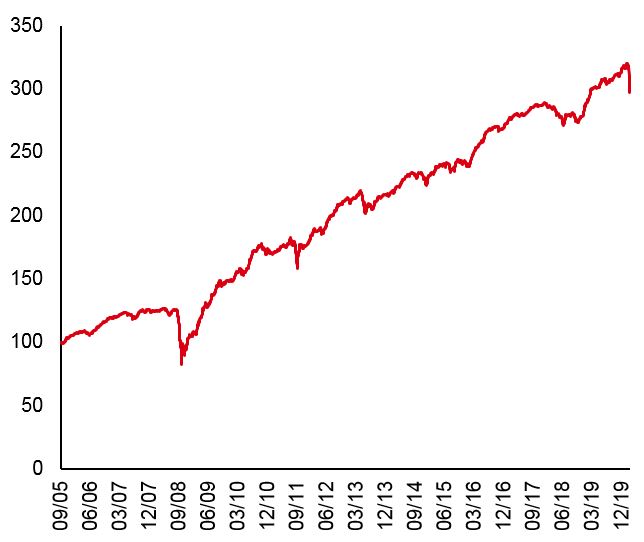 Do you find this useful?

Source: JP Morgan as of 13 March 2020. Investment involves risks. Past performance is not indicative of future performance.

In looking at the bigger picture for investment markets and beyond the disconcerting short term price action, there are good reasons to be hopeful in the medium term:

In terms of Asia fixed income specifically, there are more plus points:

What are we doing in our strategies?

The views expressed herein do not constitute investment advice, research or trade recommendation. Such views are the personal views of the author only and do not necessarily represent the views of HSBC Global Asset Management (Hong Kong) Limited.

Want to stay connected with us?

Back to top
Beginning of dialog window. It begins with a heading called "You are leaving the HSBC AMG website.". Escape will cancel and close the window.

You are leaving the HSBC Global Asset Management website.

Please be aware that the external site's policies will differ from our website terms and conditions and privacy policy. The next site will open in a new browser window or tab.
I understand, let's proceed Cancel
Beginning of dialog window. It begins with a heading called "Terms and Conditions". Escape will cancel and close the window.

This site is for individual investors in Hong Kong only.

I have read and accept the terms above and wish to continue into this site. I confirm that I am an individual investor in Hong Kong.

Page down to activate the acceptance button.

The acceptance button is now active